Natural disasters occur in the environment, continuously around the world, wreaking havoc on the affected environment and the health of those exposed. Volcanoes specifically have become an increasing concern following the recent eruptions of the Kilauea volcano which is pouring out into the Pacific Ocean off of Hawaii’s Big Island and creating high levels of volcanic air pollution – SO2 gas emission and particulate releases.

When volcanoes erupt they can release plumes of ash and gas that will pollute the surrounding air and become potentially toxic when inhaled. As volcano fissures are initiated and begin to split, the release of oozing hot lava and a dangerous amalgam of hazardous gases – such as Sulphur Dioxide (SO2), Hydrochloric Acid (HCI) and Hydrogen Sulfide (H2S) – and fine particulate matter will spread and pollute the air quality from miles and miles beyond the eruption site. According to a past publication published by the Lancet stated the following, “there is evidence that near-surface volcanic air pollution may occur more than 1400 km downwind of an eruption or quiet degassing activity and this can present significant risks for acute health hazards”.

Taking into consideration the reach of volcanic air pollution in the environment, one major concern to prepare for that follows the eruption of a volcano is air pollution, which, in most cases, likely has contaminated far-reaching environments with gases and particles released from the volcano. This pollution in the air can lead to a heightened risk of exposure to humans and contribute to potential effects on human health. Understanding the inherent risks associated with volcanic air pollution and the level of danger present with gas emissions following a volcano is critical in arming yourself with the necessary protection – such as an Air Filter Mask or Volcanic Smog Air Purifier – following a volcano eruption. 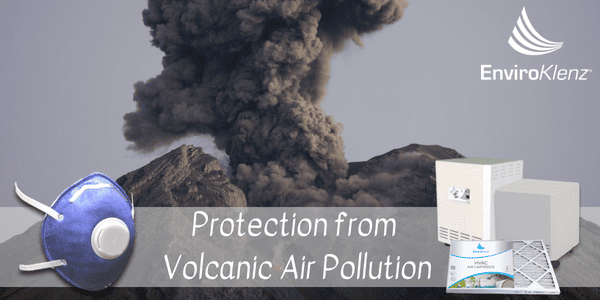 Impacts of Volcanoes & SO2 Gas Emission

There are an estimated 550 active volcanoes in the world currently, that could potentially cause a great deal of hazard to those that live near or that are exposed to the volcano and the gases & ash released from it. It is reported that approximately 9% of the global population, which is more than 500 million people, live within potential exposure range of a volcano that has been active. And now with the eruption of Kilauea in Hawaii, the danger is ever present of a volcanic eruption. Following the eruption, the island of Hawaii has suffered tremendous air quality issues, having the highest sulfur dioxide (SO2) emission in the nation, according to the EPA. This has lead to an increase in hospital visits, with treatments for vog-related symptoms and respiratory issues following the eruption.

Sulfur dioxide (SO2) is a gas that can be released from industrial activity, fossil fuel emission, and worst of all volcanoes. This gas can create symptoms when you are exposed to it in the environment. Short-term exposure to SO2 can impact the human respiratory system, as well as breathing issues and difficulties. Children, the elderly, and those with asthma or sensitivities are more susceptible to health-related issues due to exposure to SO2. The SO2 gas also has the potential to lead to a high concentration of sulfur dioxide in the air, that can, in turn, lead to the formulation of other hazardous sulfur compounds. These compounds have the ability to react with other compounds in the atmosphere to form small particles that can penetrate deep into sensitive areas of the lungs and cause other serious health problems.

What Gases Come from Volcanoes?

During the eruption of a volcano, gases are released into the environment from the magma because of high pressures that are below the earth’s surface. The gases that are released following a volcanic eruption is primarily made up water vapor, however, there is still carbon dioxide, sulfur dioxide, hydrogen, and chlorine gases found within the composition of the volcanic air pollution. 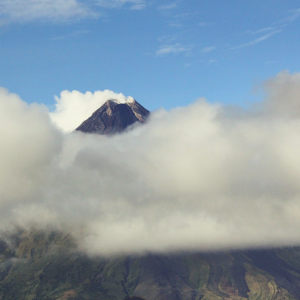 Since the first bout of eruptions in 1983, Kilauea volcano has produced at least 300 metric tons of sulfur dioxide gas and after the latest eruption, the production of this gas has been magnified in the environment. Geologists near the volcano conducted testing near the volcano to conclude that sulfur dioxide levels were above 100 parts per million. These high levels are what lead to the evacuation of those near the volcano. However, according to Dr. Elizabeth Tam, a professor of medicine and respiratory health at the University of Hawaii, “many places on the big island see levels of sulfur dioxide that are way over what the EPA considers safe”. Large amounts of sulfur dioxide in the environment can react with moisture, oxygen, dust, and sunlight in the atmosphere to create volcanic smog or “vog”. Vog, which is always present on the Big Island, can influence asthma symptoms and other respiratory conditions. Symptoms of vog can include irritation to the eyes, nose, throat, and lungs, as well as cause symptoms similar to the flu or pneumonia.

When volcanoes start creating vog (a mixture of sulfur dioxide gas (SO2) and particles (PM2.5)) it can lead to potential health problems for those exposed to or inhaling this hazardous vog in the air. Another concern produced by volcanoes is the results from lava production, also known as ‘laze’. Everyday Kilauea is creating tons of lava and as the lava flows into the ocean, the heat evaporates the water, which vaporizes salts at the same time. As the water vapor begins to cool, it will create hydrogen chloride, which when reactive with water will form hydrochloric acid and even tiny particulate matter. The lava haze or “laze” from the plume can spread as far as 15 miles west of the onset.

Kilauea has burned closed to 40 structures, including two dozen homes. With about 2,000 people having to evacuate their homes, including 300 who were staying in a shelter, the danger is still looming. The risks are still heightened for those on the Big Island who were not evacuated as outside air pollution could vastly impact health, as well as indoor air that has been invaded by the polluted outdoor volcanic air pollution. Taking steps to protect both your health when faced with the outdoor volcanic air pollution and when dealing with indoor air that has been contaminated is critical to ensuring safe health during this natural disaster.

Miles away from the active site of the volcano, ash, gases, and particles released from the erupting volcano can become airborne and spread a great distance away, impacting far-reaching areas and environments. In many cases, when a volcano becomes active and a volcanic eruption occurs, the evacuation process will begin and those close to the site will be relocated to a safer environment. However, for those that are beyond the evacuation area, the risks and dangers are still present. Kilauea has already sent ash spewing 30,000 feet into the air, and the strong winds have the potential to increase the impacted air further, leading to air pollution hazards for a greater area of Hawaii. This could not only impact the Big Island but also spread to other nearby islands and areas.

To minimize exposure to volcanic air pollution – sulfur dioxide (SO2), hydrochloric acid (HCI), and particulate matter – it is recommended to avoid unnecessary exposure by limiting time spent outdoors following a volcanic eruption, especially during ashy conditions. It is important to consider the hazards of this environment that are presented to children, the elderly, and those who suffer from respiratory diseases, as these people should especially avoid these outdoor conditions. If, however, you cannot remove yourself from the ash and avoiding the outdoors is simply unfeasible, you may want to look for a layer of protection such as an air purifier filter mask that can filter out the volcanic air pollution present in the air.

The EnviroKlenz Breathing Mask (3 pack) utilizes a patented technology that works against a broad spectrum of chemicals and odors – such as the hazardous chemicals produced by a volcanic eruption (Hydrochloric Acid, Hydrogen Chloride, Sulfur Dioxide & Fine Particulate Matter) – and breaks down these compounds at the chemical source. The EnviroKlenz technology is embedded into the air filter on the front of the mask, to take in and break down those chemical and odorous compounds that you could potentially be breathing in. The Face Mask is lightweight and reusable with an easy application – simply pull the straps to ensure a tight fit. Once you have the EnviroKlenz Face Mask on, you can feel more comfortable and safe to walk outdoors following a nearby volcano eruption.

Gas and other volcanic pollutants can settle with moisture and create the potentially hazardous volcanic smog in the environment. Volcanic smog is created when sulfur dioxide gas and other pollutants emitted from volcanic activity interact chemically with atmospheric moisture, oxygen, dust, and sunlight. Volcanic smog (vog) may pose a significant health risk by aggravating preexisting respiratory ailments and also reducing driving visibility. One of the biggest dangers with vog is the risk of it traveling into nearby home’s and tainting the indoor air quality in your home. Ventilation in many homes is poor and can lead to the confinement of these volcanic air pollutants inside of the home, which can exacerbate respiratory issues or ignite symptoms after exposure. 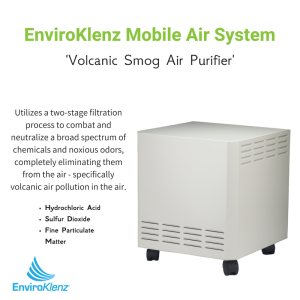 To combat volcanic air pollution in your indoor personal environment, an effective air purifier could be critical in minimizing risks. The EnviroKlenz Mobile System utilizes a two-stage filtration process to combat and neutralizes a broad spectrum of chemicals and noxious odors, completely eliminating them from the air. The first stage is the EnviroKlenz Air Cartridge that is embedded with the EnviroKlenz Patented Technology, which will eliminate any VOCs, and a broad spectrum of chemicals and odorous compounds that come into contact with the cartridge. When dealing with volcanic vog, this cartridge will take in and destroy those chemical gases such as Sulfur Dioxide and Hydrochloric Acid that is released into the air. The second-stage filtration is a hospital-grade HEPA filter that will catch the particulate matter that is larger than 0.3 microns in size. Many of the particulate matter released from a volcanic eruption will be a major contributor to health-related issues as it can easily be inhaled into the body, thus the extra layer of protection provided by the HEPA will significantly aid in reducing volcanic air pollution risks.

In the aftermath of Kilauea’s eruption, Hawaii’s population has seen the volatility that faces following the eruption of a volcano. With the release of hazardous gases and particulate matter, the volcanic air pollution created from a volcano eruption is something to both consider and plan for, especially if you live near an active volcano site. Be sure to protect your health with an effective air filter mask, as well as guard your home against dangerous volcanic smog with an air purifier.

The EnviroKlenz Breathing Mask (3 Pack) utilizes a patented technology that works against a broad spectrum of chemicals and odors – such as the hazardous chemicals produced by a volcanic eruption including:

“I like the quality of the masks. I have used it on a few occasions already. It seems to work well. I just have to learn to wear it before I am exposed to chemicals.”

“Reduces exposures to fragrances, VOCs, pollen, dust, dander, odors, and more. It’s light weight, comfortable, reusable, and latex free. I have one here and the mask itself is odor-free.”