What Are The Main Differences Between Mold and Mildew?

Mildew and mold are both fungi, which are common in most homes. These types of fungi do well in environments that are moist and easily spread and thrive on numerous surfaces, thus making it difficult to get rid of them. However, if mildew and mold are left unattended, they can adversely affect large portions of a property. In fact, they might even result in structural damage and health problems.

These two kinds of fungi might share certain features but they respond differently to treatment and pose different kinds of risk. Before we get started, if you are looking for a solution, the EnviroKlenz UV Model is one of the best air cleaners for mold and mildew . Main Differences Between Mold and Mildew

It is important to understand the various differences between mildew and mold in order to use efficient cleaning strategies that will guarantee the safety of any kind of living and working environment. Some of the differences are as follows:

Mildew is a specific kind of mold. The mold is a type of fungus with multiple identical nuclei. They usually grow in patches that are green or black and these penetrate the affected material’s surface. On the other hand, mildew exhibits a flat growth and it remains on the surface thus can easily be removed.

Normally, mold grows inside permanent structures like crawl spaces and walls or on food while mildew can be found on various organic materials around the home, paper fabrics and damp surfaces.

Types of Mold and Mildew

Mildew is a type of plant disease, it causes significant damage to plants and crops. It is classified as powdery.

The total number of mold species that are capable of living outdoors exceeds 10,000 but they are generally categorized into five types. The different types are Alternaria, Aspergillus, Cladosporium, Penicillium, and Stachybotrys chartarum. 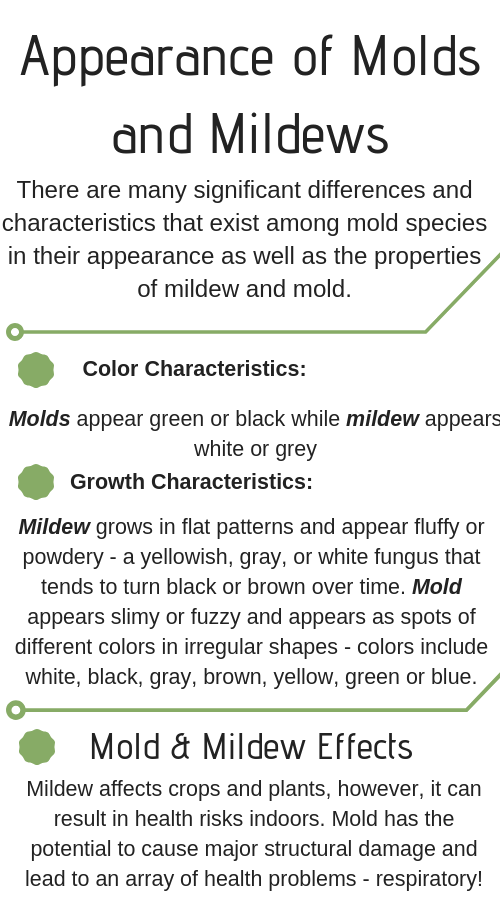 Appearance of Molds and Mildews

There are many significant differences that exist in their appearance as well as the properties of mildew and mold.

Generally, molds appear green or black while mildew appear white or gray. Mildew grows in flat patterns and appear fluffy or powdery. This means it can easily be identified as yellowish, gray or white fungus that lies on the surfaces of moist areas. Over time, mildew tends to turn brown or black.

Mold appears slimy or fuzzy. It appears as spots of different colors that are irregularly shaped. The colors include white, black, gray, brown, yellow, green, or blue. Most times, surfaces covered with mold rot eventually.

The following are the different effects that can be caused by mildew and mold if left unchecked:

Mildew affects crops and plants. However, it can result in health risks if it happens to develop indoors. The spores of mildew cause respiratory problems, sore throat, headache, and coughing.