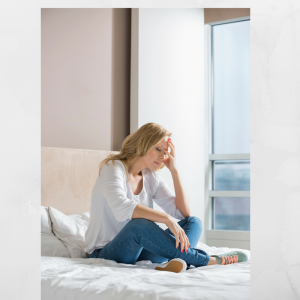 Waking up in the morning you expect to wake up just like any day, feeling the same way you felt when your head hit the pillow the night before. Well, what if that wasn’t the case, and you woke up experiencing a feeling you’ve never had before? One woman recounts waking up to half her face completely numb, describing the feeling as “going to the dentist and the Novocaine still hasn’t worn off”. It all starts with one little change, a noticeable change, that makes you take note and start to analyze what’s occurring within your body. 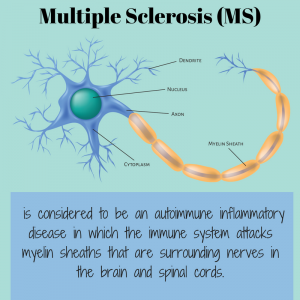 Multiple Sclerosis (MS) is considered to be an autoimmune inflammatory disease in which, the immune system mistakenly attacks the normal body tissues in your body. More specifically, the immune system attacks myelin sheaths that are surrounding nerves in the brain and spinal cords. You may be wondering, what exactly the signs and symptoms are of MS. Depending on the person the signs and symptoms can vary greatly, as well as the amount of nerve damage and which nerves are affected play a huge role in the severity of symptoms. Some patients may lose complete ability to walk independently or at all, while others may experience long periods of remission without any new symptoms. Some of the symptoms of MS include: 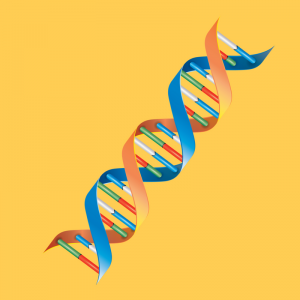 Researchers have tried to look closely into the risk factors or the reasons behind why people develop MS. They have concluded that Multiple Sclerosis is the result of a combination of genetic risks and environmental/lifestyle factors. There are four specific causes that have been linked to MS and we will see how they link back to the development of Multiple Sclerosis.

Multiple Sclerosis is an immune-mediated disease, in which the immune system breakdowns and starts to attack the Central Nervous System. The myelin sheath is at the center of this attack. Researchers have found which particular immune cells are targeting the myelin sheath and are conducting further studies to find the reason why they engage this area. They’re also searching for methods for methods to control or stop the progression of the disease.

According to the Multiple Sclerosis Foundation, if you have one parent diagnosed with MS, the risk of you developing the disease is estimated to be between 2 and 5 percent. Also, particular genes may play a role in your MS diagnosis, with your chance of developing Multiple Sclerosis being increased if a close relative, like a parent or sibling, has the disease. Some other factors such as sex, age, and ethnicity may also increase your chances of acquiring MS. Did you know that women are two to three times more likely to develop MS than men? Also, according to Mayo Clinic, Multiple Sclerosis is most prominent between the ages of 20 and 40. 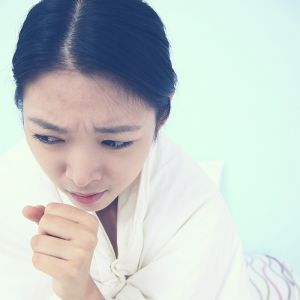 As children, we are exposed to a vast amount of viruses & bacteria. It has been linked that viruses cause demyelination and inflammation in the body, so it is possible that a virus or other infectious agents are the triggering factors of MS. Several viruses and bacteria have been contributed to the involvement of MS including Measles, human herpes virus-6, Epstein-Barr, and Chlamydia Pneumonia

Epidemiologists- scientists who study disease patterns- look at variations in geography, demographics, genetics, infectious causes, and migration patterns in the pursuit to understand the environmental factors that contribute to MS. There are many potential environmental factors that can play a role in your MS diagnosis. One factor is Vitamin D, people that live closer to the equator are exposed to greater amounts of naturally-produced Vitamin D, which is thought to support immune function and may help protect against immune-mediated diseases like MS. Smoking is also a contributing factor to Multiple Sclerosis, with an increase in the risk of developing MS linked to smoking. Lastly, air pollution can be a major risk factor for autoimmune disease patients. Researchers say that MS develops because you are born with a predisposition to react to some environmental agent such as air pollution, that triggers an immune-mediated response.

Eliminating Air Pollution In Your Home

An increasing number of epidemiological studies propose that air pollution may be potentially involved in neurological diseases, such as Multiple Sclerosis. Only a few studies have focused on the possible roles of air pollutants in the pathogenesis of MS relapse. The study showed a positive association to air pollution and MS relapse. The air outside and indoors is packed with harmful toxins and chemicals that can affect our health, our central nervous system, and especially your MS. A report from the Journal of Toxicology in 2012, showed that air pollution attacks the central nervous system and damages brain structures leading to neurological diseases.

Outdoor air pollution is a major health concern, but an even bigger concern for us is our indoor air quality. Just sit and think about the amount of time you spend in your home on average, the EPA estimated we spend about 90% of our time indoors whether that be at home or in any indoor space. The air we breathe indoors believe it or not is much more harmful than the outdoor air due to the chemicals exposed in our indoor air. These indoor chemicals can be a result of mildew, mold, dust mites, and off-gassing from paints, carpets, wood floors, air fresheners, candles, etc.

I know, that’s a lot of possibly toxic chemicals circulating in your house and polluting your air. Maybe it’s time to look into a method to absolve this air pollution problem in your home. The EnviroKlenz Mobile Air System is the best air cleaner for indoor allergen removal. This product uses hospital-grade technology to guarantee the air in your home or in any indoor area be as clean and pure as possible. With a certified HEPA filtration and our own unique to us EnviroKlenz Air Cartridge, we remove and neutralize VOCs, malodors, and fragrances. What makes the EnviroKlenz Mobile Air System different than any other air purifier is that rather than trapping the odors and re-releasing them back into the air like many carbon air purifiers, our system traps and captures the odors and chemicals and completely neutralizes them so they are not remitted into your air. 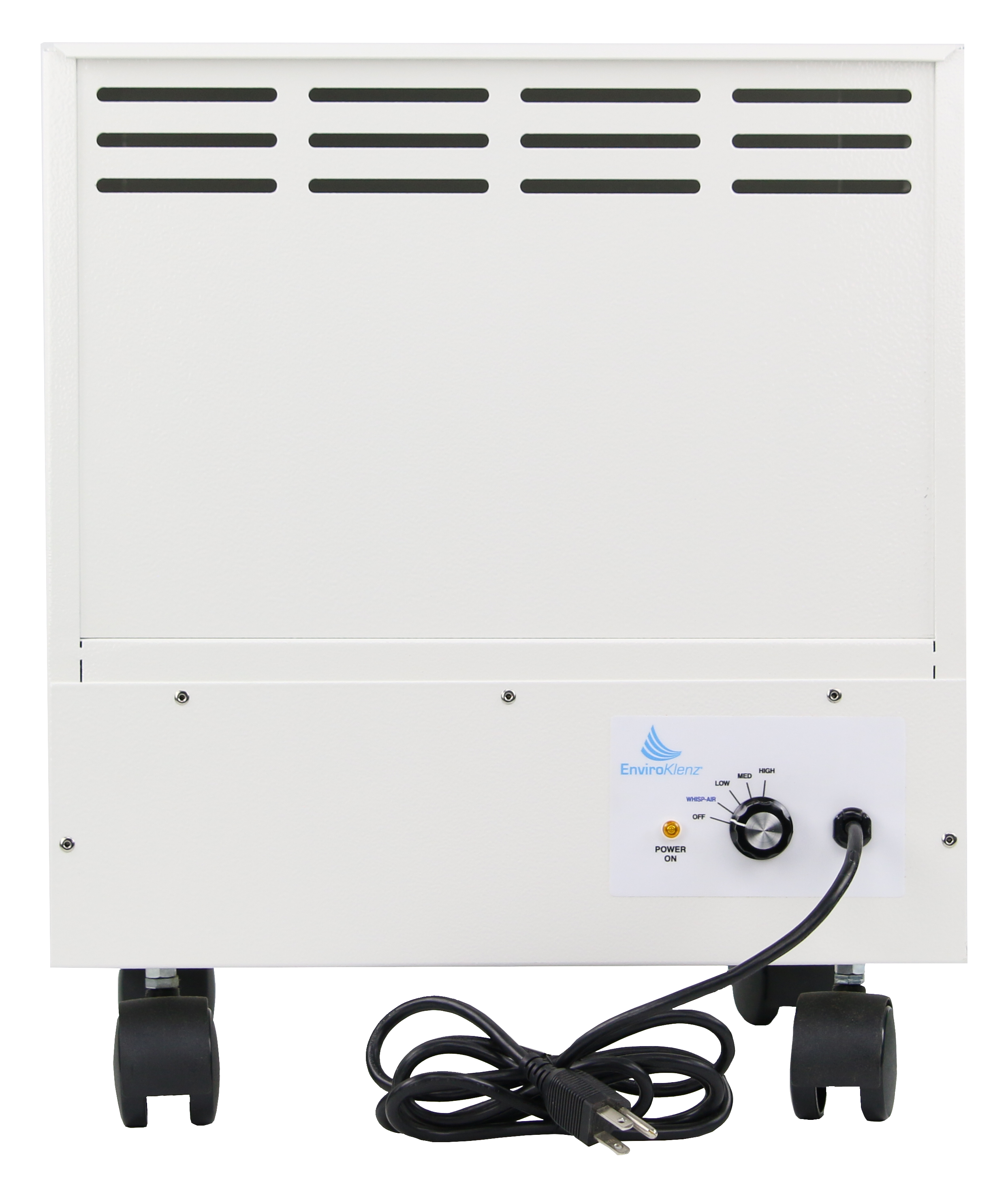 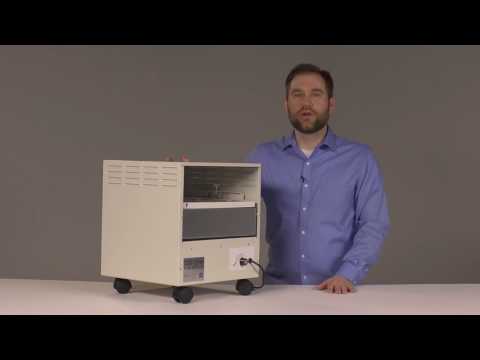 The EnviroKlenz Mobile Air System is your solution to remove VOCs from your home or office both safely and effectively. The unit is portable and once the EnviroKlenz-Air® Cartridge (size 14”x14” included with purchase) is installed it will begin to remove and neutralize chemical odors, allergy triggers, and malodors in the air.

Select options
Air pollution is something that MS patients need to be cognizant of when monitoring their health. So make sure to try using natural products and have an effective air purifier in your home to eliminate air pollution in your environment.

Here What People Are Saying About Us…

“My husband was a roofer by trade for 40 plus years. As you can imagine his lungs took a beating from roofing over 10,000 homes in his career. Our doctor recommended an air cleaner and more specifically the EnviroKlenz mobile system. He had one sitting in his often and we can really notice how different the air in his examining room was compared to the waiting room. The cleaner is great and easy to move around and my husband loves to take naps with it on whisper mode as he says it helps calm him down and put him to sleep.”

“After three weeks of research, and a final consult with my Naturopath, I purchased the Enviroklenz air cleaner. It has run beautifully now non-stop for the last 6 months. I LOVE IT! It instantly removes any odors from the house, along with allergens and other worrisome airborne stuff. I no longer fear my chain smoking neighbor will pollute my apartment and have been able to sleep throughout the night for the first time in 7 years. 5 star plus.”

“Perfect for Allergy and Asthma sufferers, this air purifier uses HEPA filtration and a fancy cartridge to really help clean my air. I was on the verge of selling my home because of some toxic flooring that was installed. Under consult from an environmental consultant, I purchased 3 systems and was able to get back into my home in a few week. I run these units 24-7 and love them.” 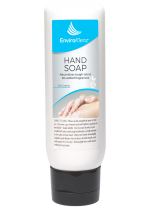 The EnviroKlenz hand soap utilizes the EnviroKlenz patented earth mineral technology to neutralize the odors at the source without the use of masking agents of fragrances. 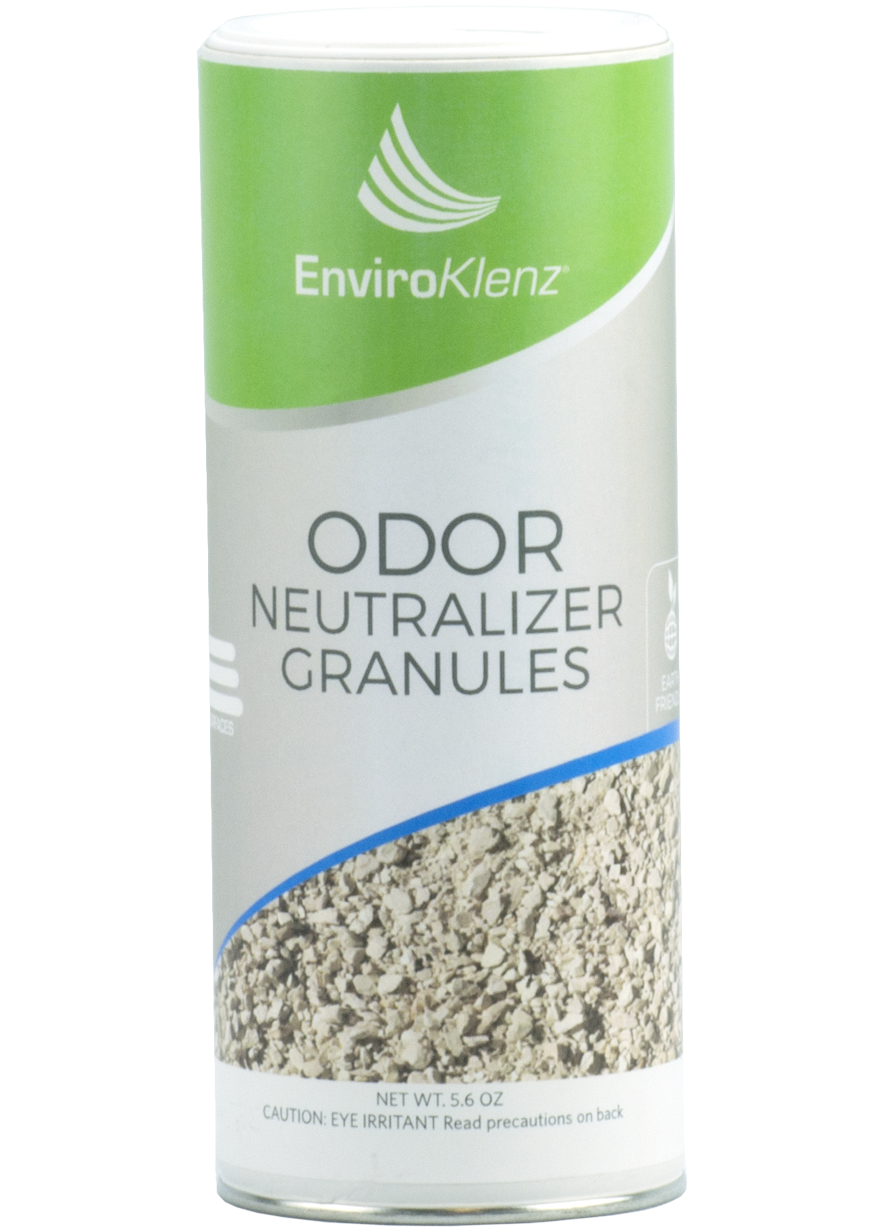 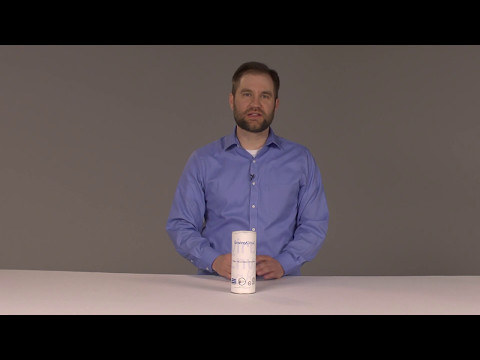 Odor Neutralizer Granules attach themselves to the spilled materials and get to work instantly to effectively and safely remove the odors… even on the most absorbent fabrics and carpets. 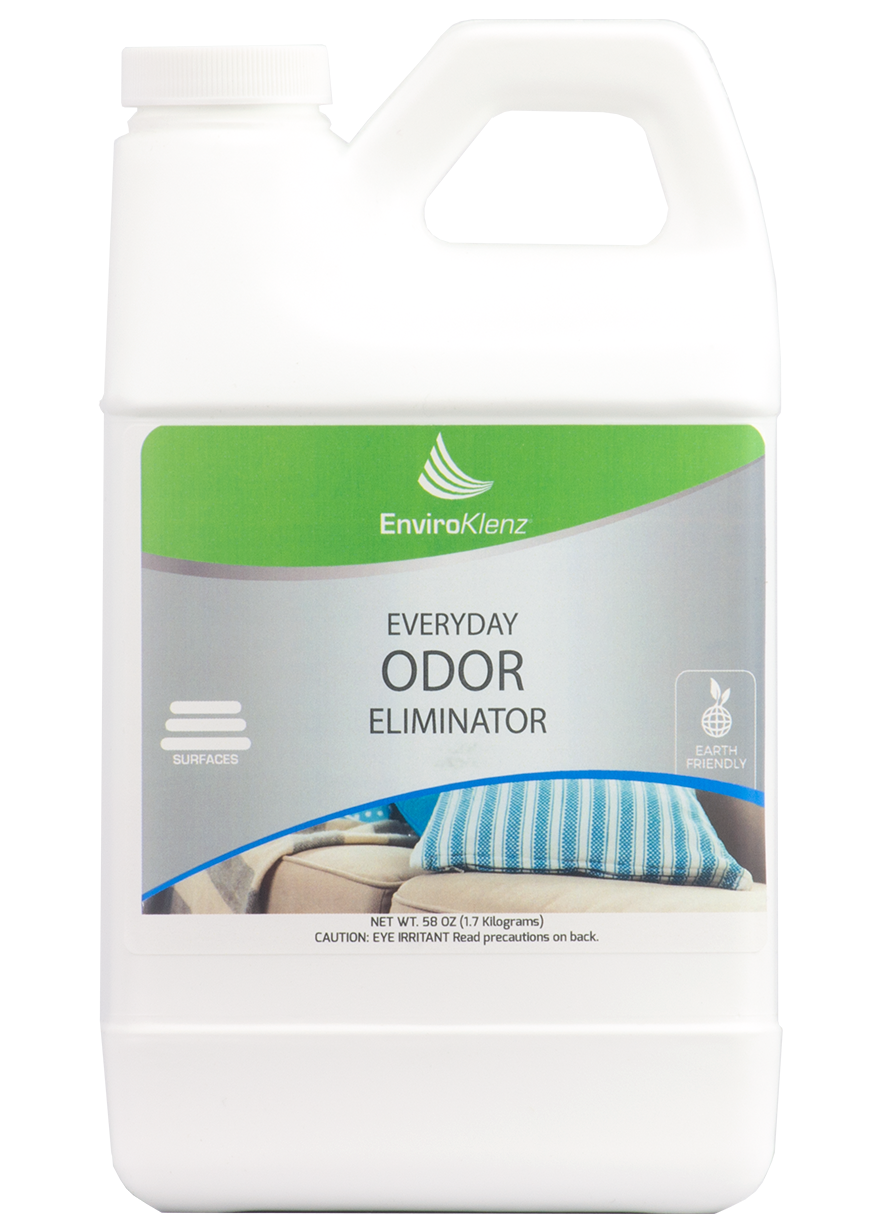 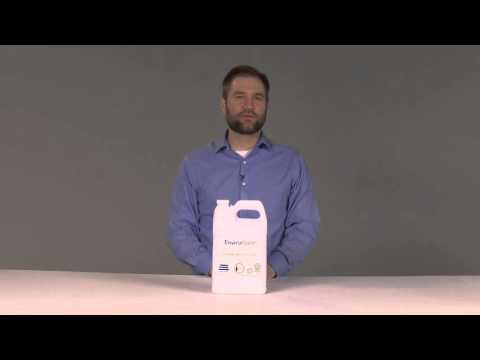 The EnviroKlenz Everyday Odor Eliminator was designed to safely and effectively remove odors and fragrances that are present in carpeting, solid surfaces, upholstery, and furniture.