The EnviroKlenz® Mobile Air System with UV Light combines Advanced EnviroKlenz technology for toxic and noxious chemical and odor removal with HEPA filtration and ultraviolet germicidal radiation (UVC) to remove airborne particulates and allergens and inhibit the growth of captured microorganisms (such as bacteria, mold, and viruses). 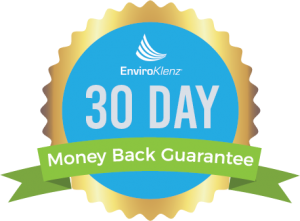 What Makes The EnviroKlenz Mobile Air System the best choice for me?

The EnviroKlenz® Mobile Air System with UV Light combines Advanced EnviroKlenz technology for toxic and noxious chemical and odor removal with HEPA filtration and ultraviolet germicidal radiation (UVC) to remove airborne particulates and allergens and inhibit the growth of captured microorganisms (such as bacteria, mold, and viruses).

EnviroKlenz Air Cartridge is effective against toxic or noxious odors and chemicals through our proprietary “Adsorptive Neutralization” process. The EnviroKlenz Air Cartridge is designed to last 5-6 months, ensuring that the unit operates at peak odor removal efficiency at all times. This makes this model one of the best air purifiers for mold and mildew management on the market.

The EnviroKlenz UV systems are equipped with a true medical-grade HEPA filter. The HEPA filters 99.97% of all particles down to 0.3 microns in size. The filter has a life expectancy of 18-24 months.

The EnviroKlenz Promise
Backed by the best warranty in the industry and full 30-day money back guarantee.

30-Day, No-Questions-Asked, Money-Back Guarantee
If you are not 100% happy with your EnviroKlenz mobile system, contact us to set up a return within 30-days, no-questions-asked.

How Does The EnviroKlenz Mobile System Compare to Carbon Air Systems?

In the chamber study below, hydrogen sulfide was released in an environmental chamber under ambient conditions.  The various air systems and technologies were remotely controlled to not disturb the environment.  The EnviroKlenz Air System rapidly reduced and neutralized the acidic gas from the air.  The IQAir system which utilizes a significant amount of an activated carbon did remove the H2S from the air, but since carbon is not reactive, there is the potential for the hydrogen sulfide to be released back to the atmosphere with changes in temperature, pressure, and or humidity levels.  The Blue Air purifier utilizes HEPA filtration and only some physical absorption of the acid gas on the HEPA filter was observed.  The MoleKule system did not rapidly remove the hydrogen sulfide and a bare carbon filter did not absorb or adsorb the acid gas.

The IQAir uses a carbon filter that contains well over 5 pounds of media.  The EnviroKlenz Air Cartridge is able to achieve the same results with less than ½ pound of media! This means fewer change-outs and money spent on replacing carbon filters.

Graph: Comparison of Air System at the removal of acid gas (hydrogen sulfide) 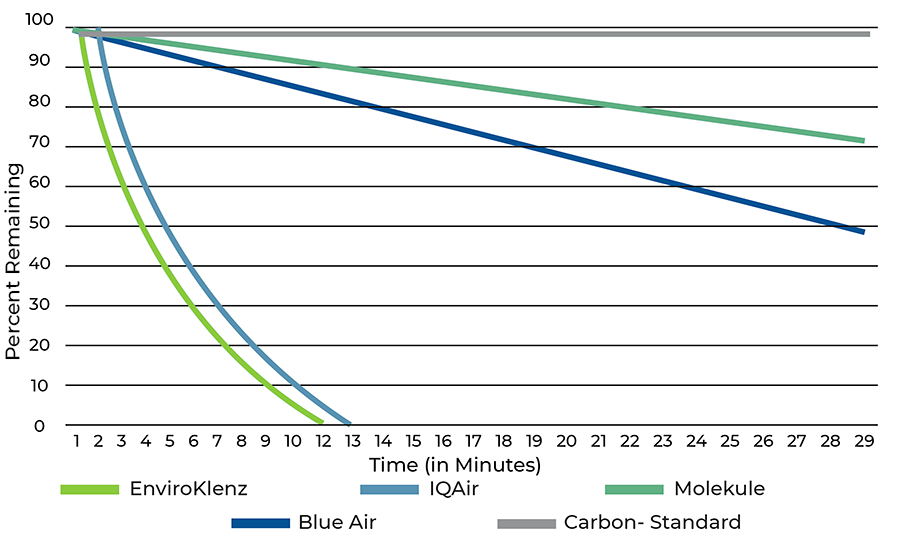 In this chamber study below, ammonia was released in an environmental chamber under ambient conditions.  The various air systems and technologies were remotely controlled to not disturb the environment.  The EnviroKlenz Air System rapidly adsorbed the ammonia gas from the air.  The IQAir system which utilizes a significant amount of an activated carbon did remove the ammonia from the air, but since carbon is not reactive, there is the potential for it to be released back to the atmosphere with changes in temperature, pressure, and or humidity levels.  The bare carbon filter had minimal absorption of the ammonia.  The Blue Air purifier utilizes HEPA filtration and only some physical absorption of the ammonia on the HEPA filter media was observed.  The MoleKule system did not remove or breakdown the hydrogen sulfide in the test.

Graph: Comparison of Air System at the removal of a nitrogen compound (Ammonia) 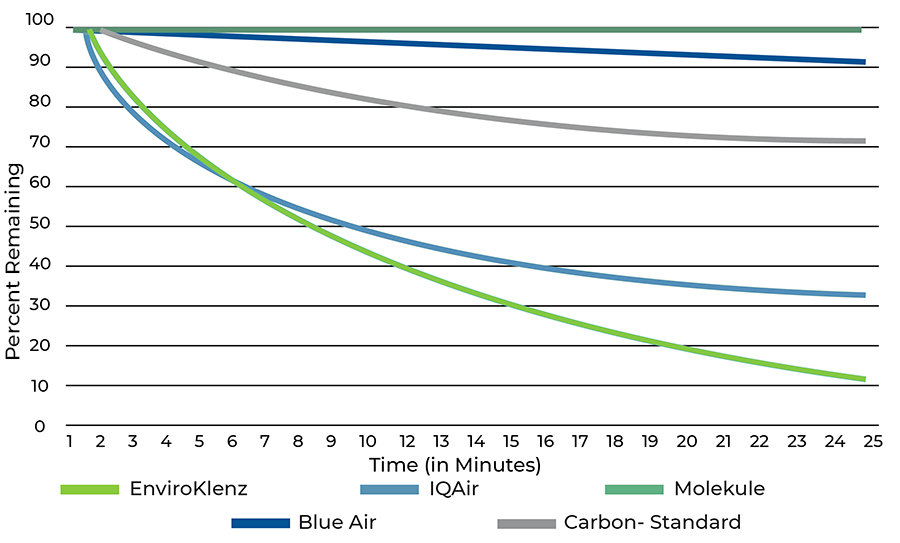 The Limitations of Carbon Air Purifiers

In this study, we utilized the IQAir system with the carbon filter and subjected it to VOCs in an environmental chamber.  The temperature in the chamber at the beginning of the study was 72 degrees Fahrenheit.  The VOC compound released and allowed to equilibrate.  The air system was turned on and allowed to clear the chamber bringing the VOC to 0 ppm.  The system continued to run and then at 48 minutes, the temperature in the chamber was increased.  By 58 minutes, the temperature had risen to 74 degrees and at 70 minutes the temperature was 78 degrees and the VOCs were rapidly off-gassing from the system.  At the 90-minute mark, the VOC level had returned to the 50% level from the start of the experiment.  This illustrates one of the significant drawbacks of absorption-only technology.  Changes to the environment can negatively impact the performance of the system. 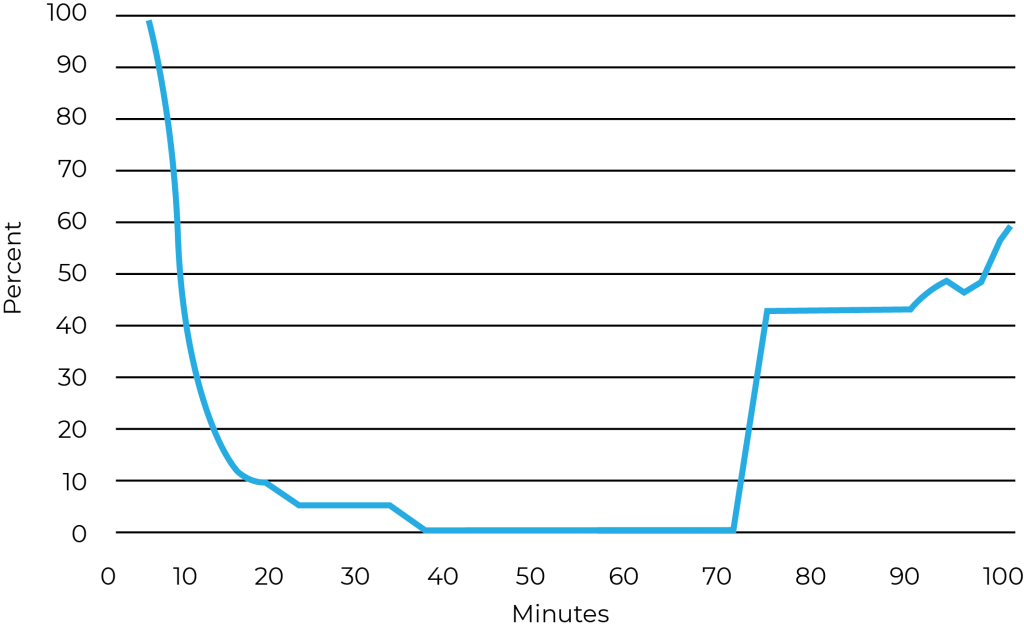 In the study against formaldehyde, the IQAir® was able to reduce the compound the fastest from the chamber due to having a much higher loading of media. The MoleKule® did not have much impact on the formaldehyde in this study. The BlueAir® HEPA media and bare carbon filter did show some physical absorption of formaldehyde, but physical absorption is very prone to releasing whatever it may have absorbed over time since there is no chemical interaction. The EnviroKlenz® Air System does actively react with the formaldehyde through adsorption and polymerization on the oxide surface of the EnviroKlenz® media. 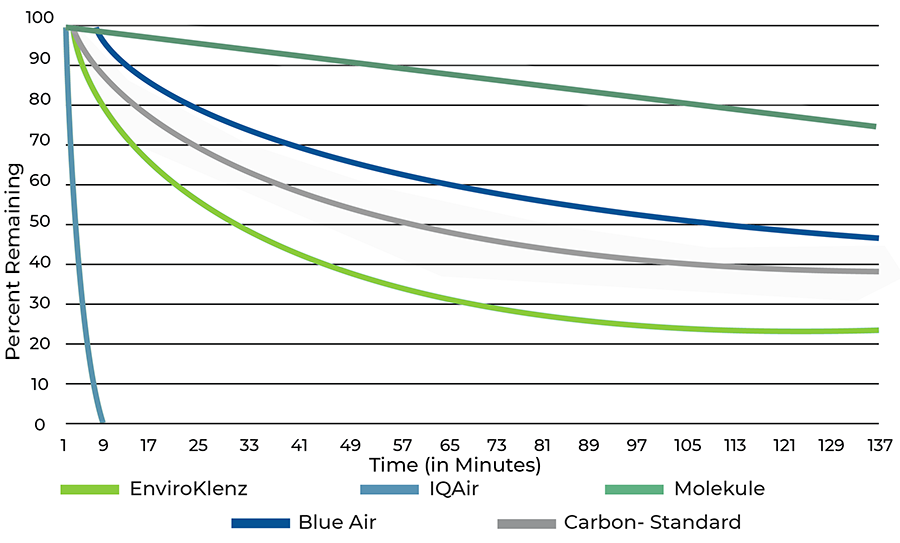 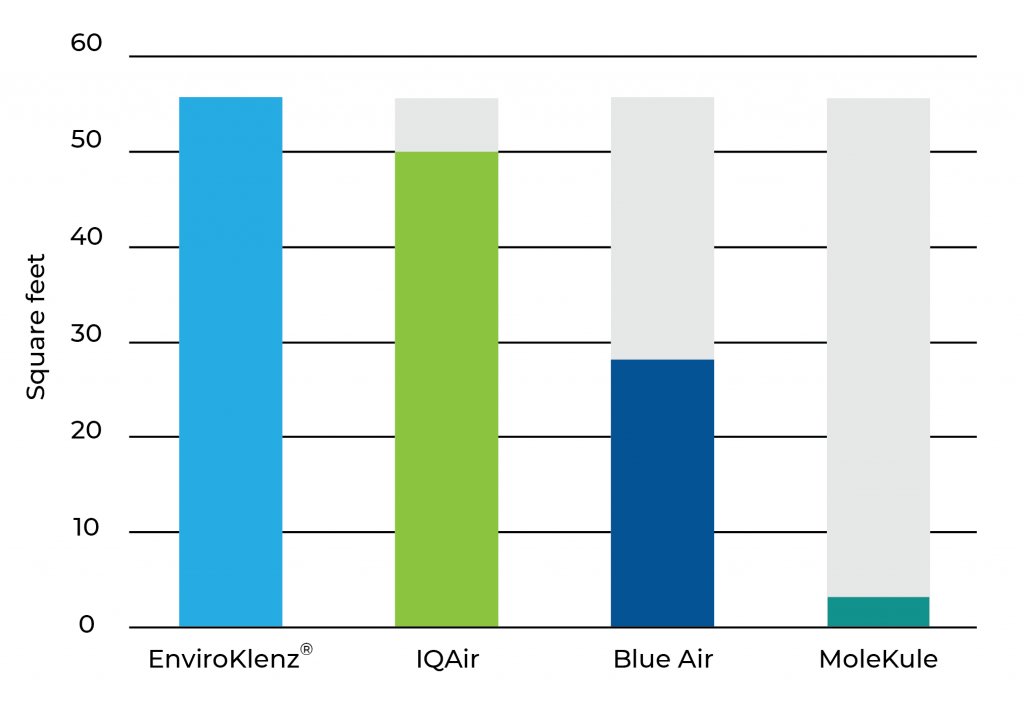 How Does The EnviroKlenz Compare in Sound “Decibels” 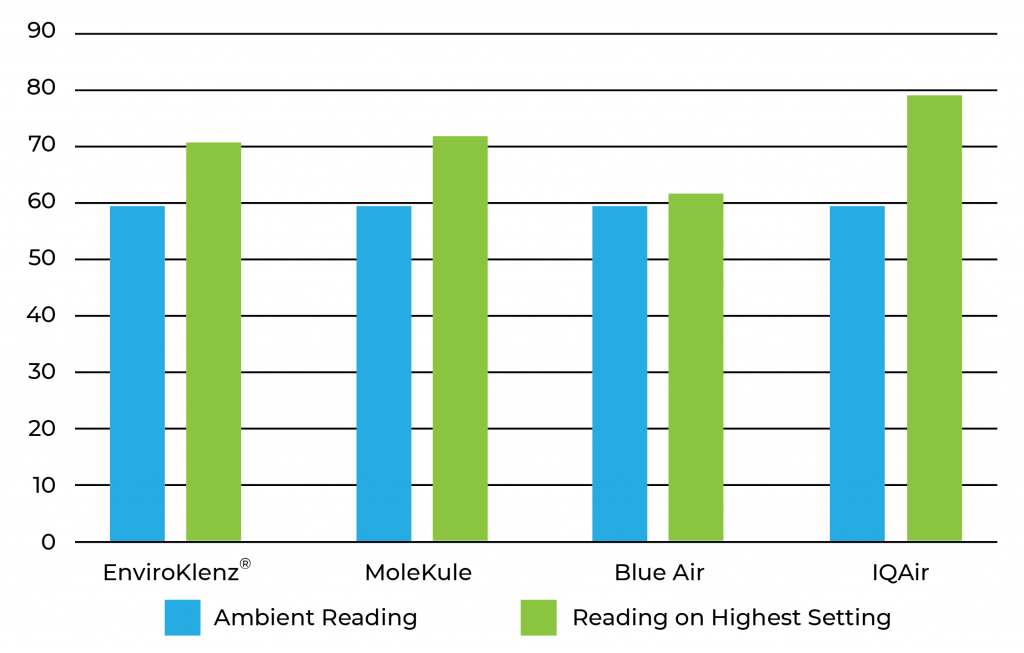 The Cost to Operate

The cost to operate based on continuous use, 0.12 kw/h, and system run on the highest setting. 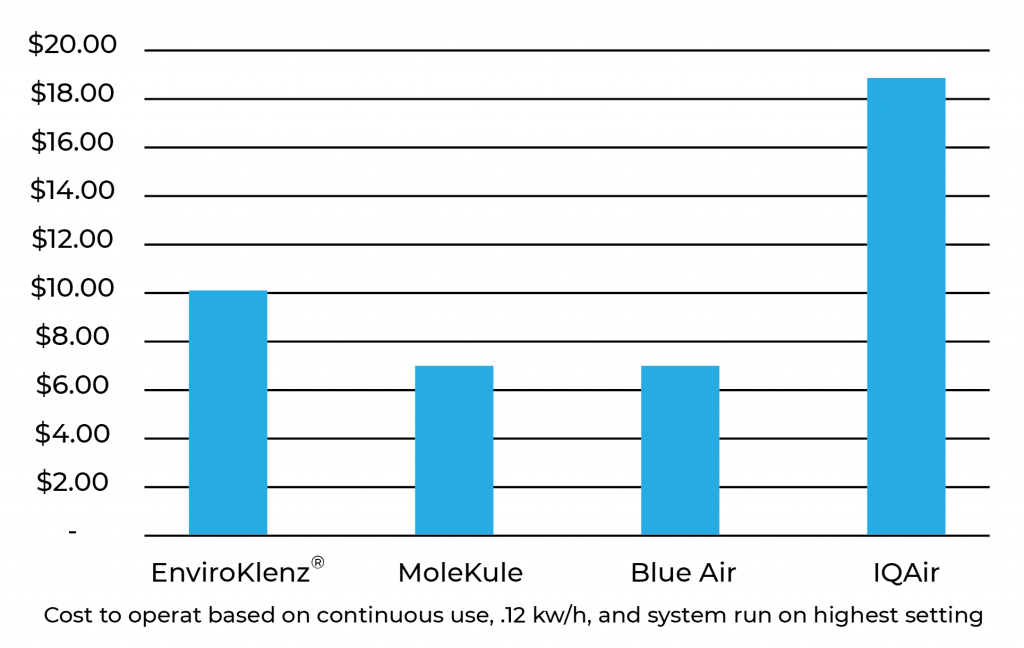 The HEPA filter will last approximately  2 years. The EnviroKlenz Air Cartridge will last typically 5-6 months. Actual lifetime is dependent on environmental conditions and chemical pollution concentration present in the environment it is used in.

What tools will I need to assemble the unit?
No tools are necessary to set up the system
How is this technology different from Carbon?
Carbon is a commonly used material in odor control applications. It absorbs odors; however it does have several serious disadvantages. Most significantly, carbon only physisorbs toxic, noxious, and other odor causing molecules, meaning that the unwanted chemicals do not react chemically with the carbon and can be released them later and cause the re-emergence of an odor believed to have been initially neutralized or eliminated. Changes in humidity or temperature can hasten this process, causing the odors and other unwanted chemicals to be released back into the air.EnviroKlenz® products have proven to be highly efficient “adsorptive neutralizers” for chemicals making them not only competitively advantageous over carbon, but ideal in multiple chemical sensitive situations. When the EnviroKlenz materials come into contact with the airborne pollutant, the metal oxides’ active sites first capture the chemical then initiate the neutralization process. This type of action is needed for the numerous types of pollutants that possess a variety of different functional groups. The increased surface area, unique physical morphology, high chemical reactivity, and functional porosity, all contribute to the enhanced chemical adsorption and neutralizing characteristics of EnviroKlenz.
I see that the technology utilizes metal oxides to remove odors & VOC's , are these oxides safe to have in my air?
The EnviroKlenz products do use metal oxides. Metal oxides are considered safe earth minerals and are used in many products, including things we eat. So if they were in the air, they would be safe. It should be pointed out however, that the EnviroKlenz Mobile Air System does not release metal oxides or ANY chemicals to the air. The system uses the air flow to bring the chemical pollutants into contact with the patented EnviroKlenz materials INSIDE our cartridge, not out in your personal environment.
How long do I need to run the unit before I notice a difference in the air quality?
Often you can start to notice improvements within hours, but depending on the environmental conditions and contamination level it may be faster or longer.
Are there any independent studies on the technology and how it compares to carbon technology?
Yes, you may email us at custserv@timilon.com and request a copy or feel free to call us at 239-331-5711 as well.
Will the EnviroKlenz mobile remove both odors and chemical odors?
Yes. the EnviroKlenz Air Cartridge installs right into the uint to remove VOCs, Chemical odors, and Fragrances.
How does the EnviroKlenz mobile compare to other air purifiers?
Many air purifiers focus on particulate removal and neglect proper chemical neutralization.  The EnviroKlenz Mobile Air System combines particulate removal and chemical neutralization into 1 system.
If I don't like the unit am I able to return it?
Yes, we offer a full 30-day money back guarantee on all EnviroKlenz purchase. 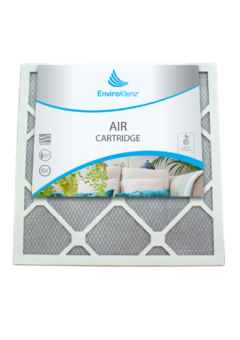 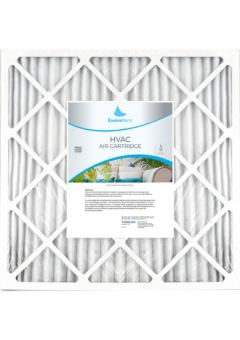 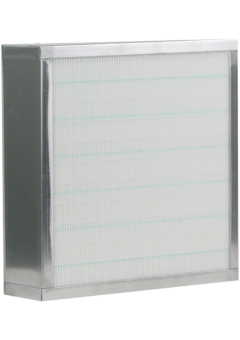 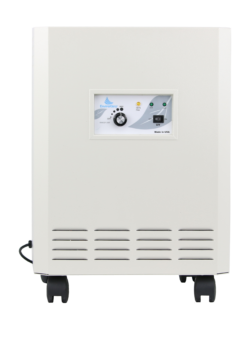 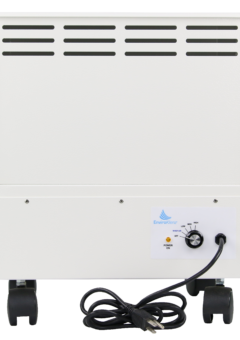