How to Remove Fragrances, Smoke Odors, & Chemical Odors From Your Car

How to Remove Chemical Odors From Your Car

We do our best to keep our cars clean and free from toxins that may be harmful to our health, but it is sometimes difficult to remove fragrances from your car with traditional odor eliminators. Besides having to deal with common odors in your car, there are many harmful chemical odors that are associated with “new car smells” that dramatically affect the indoor air quality inside of your car.

What Causes Chemical Odors In your Car

Both the scent and what produces varies somewhat in different kinds of cars. Most of the interior of an automobile consists of plastic held together with a number of adhesives and sealers. When the car is first manufactured, these materials are left slightly unstable, and continue to release volatile organic compounds into the air afterward (cf. outgassing or off-gassing). These fumes may also come from phthalates and other plastic softening chemicals (plasticizers) that evaporate (or outgas) over time.

In 2012, the Ecology Center, a Michigan-based nonprofit environmental organization, tested more than 200 vehicles of model years 2011–2012 for chemicals such as “bromine (associated with brominated flame retardants, or BFRs), chlorine (indicating the presence of polyvinyl chloride, or PVC and plasticizers), lead, and heavy metals that off-gas from parts such as the steering wheel, dashboard, armrests and seats” and produced a ranking table.[1]

Scientists who have studied the chemicals released recommend keeping new cars well ventilated while driving, especially during the summer. A 1995 analysis[2] of the air from a new Lincoln Continental found over 50 volatile organic compounds, which were identified as coming from sources such as cleaning and lubricating compounds, paint, carpeting, leather and vinyl treatments, latex glue, and gasoline and exhaust fumes. An analysis two months after the initial one found a significant reduction in the chemicals. The researchers observed that the potential toxicity of many of these compounds could pose a danger to human health.
via..http://en.wikipedia.org/wiki/New_car_smell

How To Remove Fragrances & Chemical Odors From Your Car

If you are chemically sensitive or fragrance-sensitive it is important that you do your best to limit the amount of exposure you come into contact with chemical odors and fragrances. Often fragrances can easily be transferred into your vehicle from a passenger or cleaning products used by car wash or detailer. In the past removing fragrances safely from your vehicle was very difficult as traditional products will not be able to remove the fragrances and many of them contained harmful chemicals that were not safe to use.

EnviroKlenz Everyday Odor Eliminator was designed to safely remove fragrances and chemical odors from your car without the use of harmful toxins. The Everyday Odor Eliminator can be applied directly to the upholstery, seats, carpeting, and can also be diluted down into a spray bottle to clean the dash and interior of your car. When cleaning the seating in your car that has been affected with odors apply the EveryDay Odor Eliminator on the source of the odors and allow 10-15 of contact time.Once dry you may come behind with an extractor and extract out any residual left behind on the upholstery. If you do not have a hot water extractor available you may use a brush to brush up loose debris and then vacuum it up. The product contains no masking agent or fragrances and will work to neutralize the chemical odors at the source and restore the indoor air quality in your car quickly. The same steps may be used to remove smoke odors from your car as well as any chemical odors or malodors as well.

For more information, check out the Enviroklenz guide on how to remove odors quickly. 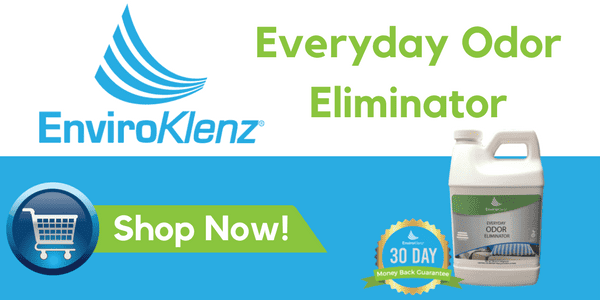 “I purchased a new car for my son at the local BMW dealership. I wouldn’t say he s chemically sensitive but he does have his moments when he drove the car home the first day his eyes were red and had a really bad sore throat. Each day that he drove the car it got worse so I needed to have it detailed but no one knew of a product that I could use that wouldn’t add to his problem. I purchased this gallon after my own research and decided to clean the car myself. I will be honest it wasn’t easy at my age to use an extractor and clean it out but I can say with 100% honesty that this stuff flats out works!! My son was driving around town that very night and hasn’t had issues since.”

“I am so glad that I found this product, we purchased an apartment that had new carpeting and the previous owner kept a stash of fragrant product in a closet that drove my allergies wild. We applied the product on the carpeting and used on hand held extractor to get it out. With an hour I could notice a huge difference and by the next morning, I was able to get rid of 90% of the chemical smells in my apartment. It is a shame that I couldn’t charge my landlord but he to was impressed with this and promised me he will use it on his other apartments.”